Hacked satellites, the hacker may be from Spain or Portugal

Hacked satellites, the hacker may be from Spain or Portugal

A private person has hacked at least one satellite, and sends out illegal signals (beams) over a large part of the world. The signals make people behave physical different than normal. The illegal satellite signals may have started around 6. of June 2005.


About the hacker
He could be from Portugal or Spain


The hacker could very well be from Portugal or Spain. Identification of the hacker and his friend:
1: The hacker: Slim, with carismatic eyes, kind of natural "silver hair", the hair is a little bit long, he uses dungaree trousers, he is maybe around 180 cm tall. He has a kind of portuguese or spanish look.
2. His friend: Blond, normal looking, maybe around 175 cm tall, not slim, not fat. Probably he was at the airport in Berlin in Germany in June 2005.
Both of these two were at the police station of Policia de Madrid San Blas in Madrid in Spain in June 2005.

The hacker is very intelligent. He is very interested in principles. It is quite possible that he has told friends about the idea of hacking a satellite to read the thoughts of president Bush.

There are at least three visible effects of the illegal signals:

1. People use their hands more to touch their faces, cheeks, chins, mouths and their heads in general. Here are some examples of hand movements which have increased in frequency: 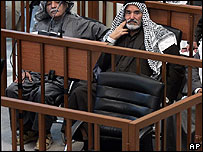 The judge in the trial against Saddam Hussein:

These kinds of hand movements are not necessarily unnatural, but they appear more often now, because of the illegal satellite signals. It seems to be that people who relax physically, for example Saddam Hussein and the other accused in the Baghdad trial, react more visibly on the satellite signals which lead to more hand movements to the face. Also for example politicians which sit in parliaments and listen to speeches, seem to react more visibly on the signals which increase the frequency of these mentioned hand movements.

2. Another effect from these satellite signals is that people blink more with their eyes than before. It is especial easy to observe this on news reporters and news presenters on television, for example on tv channels like Bloomberg and Sky News. People who are concentrated, for example news presenters, react quite visibly on those satellite signals which increase more blinking with their eyes.

3. People move more staccato then normal. Peoples movements are not so soft as normal. This is also a result of illegal satellite signals.

The person which has hacked one or more satellites, probably uses private equipment to reach the satellites directly. Then the companies, which are technical responsible for the satellites, do not observe the hacking.

Normal satellite signals are so large that they do not get into the brains of human beings. But the hacker sends very fine small signals which enter inside peoples brains. These signals then hit nerve systems or functions systems in peoples brains. Then the hacker can make human beings behave different than normal. The illegal satellite signals are so fine (high-resolution) that they enter through the brain cranium and metal.

If you observe the increase in the mentioned hand movements, the increase of the eye-blinking or the unnatural staccato movements , you can report it to: